Late last week, a curious alert appeared in the Federal Aviation Administration’s database of Notices to Airman, or NOTAMs, which, among other things, alerts aviators to chunks of airspace that are temporarily off-limits. The details strongly point to the comings or goings of a high-flying aircraft between either Area 51, also known as Groom Lake, or the Tonopah Test Range Airport, two of the U.S. military’s most closely-guarded flight test facilities, and the Pacific Ocean to the southwest of San Francisco, California.

The NOTAM, which was first pointed out by users of the Dreamlandresort.com message board, was issued on March 12, 2021, but was only active between 5:45 PM and 8:15 PM local time the following day. This is a very odd time when military aviation training and test activity is usually at a minimum. The notice outlined a path 20 nautical miles wide and 426 miles long at an altitude between Flight Level 450 and Flight Level 600, or 45,000 to 60,000 feet. The exact route, defined by a series of named waypoints, can be plotted using tools available on the website ForeFlight, as seen below.

If one starts in the west, the route consists of a stretch 104 nautical miles long between the Pacific Ocean and the waters southwest of San Francisco. The next leg runs 54 miles south to an area just west of Monterey, California, before turning inland over a relatively sparsely populated route across California and into western Nevada for the remaining portions.

Source: Mysterious High-Altitude Flight Corridor Was Opened Up Between Area 51 And The Pacific 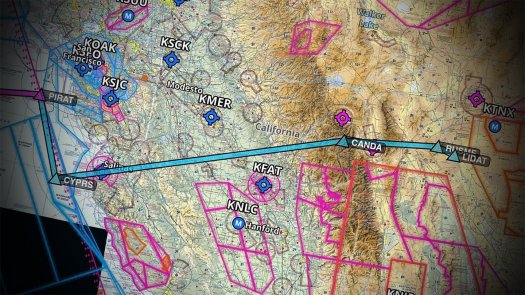