It came after Mr Netanyahu withdrew a request for parliamentary immunity from prosecution on charges of bribery, fraud and breach of trust in connection with three separate cases.

He has denied any wrongdoing.

The Israeli parliament had been due to open a debate on the immunity request on Tuesday. But Mr Netanyahu said he would not have got a fair hearing.

He also criticised opponents for going ahead with the debate when US President Donald Trump was due to unveil his long-awaited Middle East peace plan.

On Wednesday, Mr Netanyahu will fly to Moscow to brief Russian President Vladimir Putin on the plan, Israeli officials said.

What did Mr Netanyahu say?
Israel’s longest serving prime minister is accused of accepting gifts from wealthy businessmen and dispensing favours to try to get more positive press coverage. He says he is the victim of a politically motivated “witch hunt”.

In a Facebook post published on Tuesday morning, Mr Netanyahu said he had informed the speaker of parliament, which is known as the Knesset, of his decision to withdraw his request for immunity. 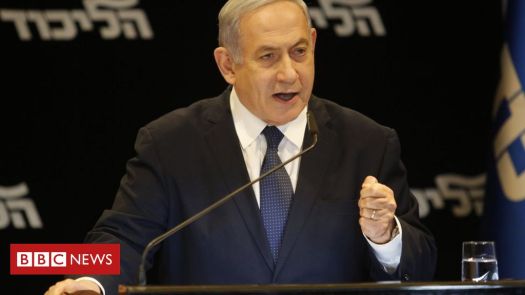