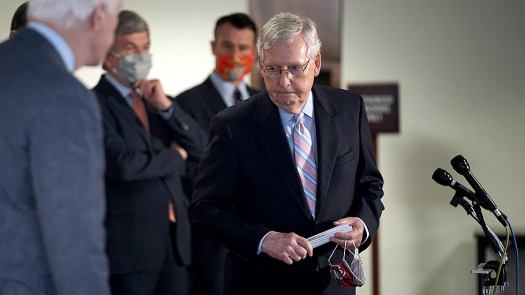 The Senate left Washington, D.C., on Thursday until September — the latest sign that a deal on a fifth coronavirus relief package is, at least, weeks away.

Senate Majority Leader Mitch McConnell (R-Ky.) had kept the chamber in session this week, which was technically the first in its August recess, as a last-ditch attempt to create space for the administration and congressional Democrats to get an agreement.

But with talks stalemated, senators argue there is little reason for them to keep holding daily, roughly 1 1/2-hour sessions. The House already left town and isn’t expected to return until Sept. 14.

“We will have our regular pro forma meetings through the end of the state work period. If the Speaker of the House and the minority leader of the Senate decide to finally let another package move forward … it would take bipartisan consent to meet for legislative business sooner than scheduled,” McConnell said as he wrapped up the Senate until next month.

McConnell added that he hoped the Senate would be able to “act sometime soon.”

Senators will get at least 24 hours notice to return if congressional Democrats, Treasury Secretary Steven Mnuchin and White House chief of staff Mark Meadows are able to break the impasse and votes are scheduled. Otherwise, the Senate will formally reconvene on Sept. 8.

Sen. Chuck Grassley (R-Iowa) predicted during a conference call on Tuesday that if negotiators didn’t restart by Thursday, the administration’s executive orders would be the only action that takes place until early September.